For all you gamers out there who play Rock Band on PS3 or any other console.

Meet Ava, actually it’s ava, she doesn’t punctuate. She doesn’t! ava is one of my alter egos. She is most like me, except she plays drums in a band called The Stonecold Steve Austins. Yeah. She didn’t make the name up, for one it’s punctuated, for two it’s a guy name, and for three they are not wrestlers. Duh.

The band consists of the leader who is Steve Austin plays guitar. The singer Daisy, blonde hair, zebra pants, with a cute pink halter top (perfect 15yr old rendition). She’s all that. Then the band’s bass player is Jolt, soap star looking blonde with a big tattoo on his chest. The singer really digs Jolt.(Jolt, 16yrs old been dating Daisy over a year) He plays with his shirt off.

Before ava joined the band, the previous drummer was named Jade. Long black hair in dreads, pale skin, big green eyes with a nose piercing. She wore a leather jacket with a hot pink bikini top sporting leather pants. Jade ROCKED. She had a silver drum set. Seriously! She was crazy cool (and sooo unlike me).

See, Jade felt out of place. Everyone else in the band was themselves, or most like themselves. So she left – promising to return and jam again when the mood so strikes – and ava joined. Daisy thought ava looked fat and she can’t stand the fact that she wears a pink top with jeans, and the jeans have a red belt, that doesn’t match. What-evah!

Thing is, whether it’s Jade or ava, neither drummer has ever gotten a 100%, even on EASY. It’s an elusive feat for both of them. And not because of practice either, when Jade started she barely made it through a song without failing out. She just banged away until the song ended if she couldn’t catch the beat. Believe me sometimes her beat was waaaay off.

ava comes along with much more experience, but still misses the mark on 100%, every time. She has made a promise to herself, as soon as she peaks the score, and snatches that 100%. It’s medium all they way baby! 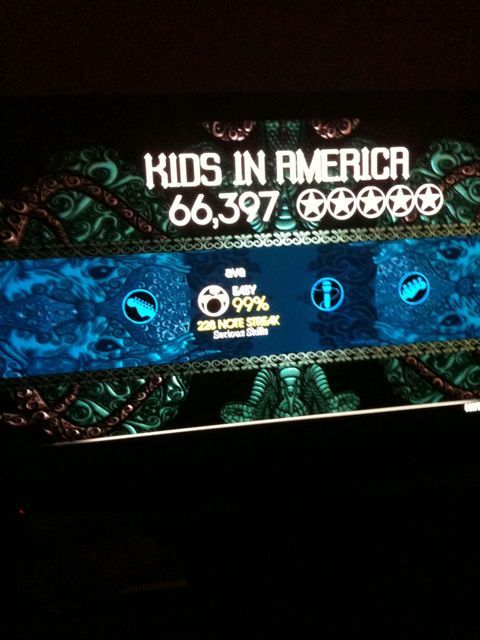 Truly, I wasn’t a gamer until I met Jason. I had no idea what I was missing. It is a fun family activity, that everyone can enjoy. It’s also a great way to enjoy music. We don’t just have Rock songs, we have country, Christian rock, and metal. There is a variety. My favorite right now is Kings of Leon.

I don’t let it get me down that I can’t quite attain the 100 score. I just keep playing with all my heart. I keep trying. I love this game. I’ll get there eventually. In the meantime…..I WANNA ROCK!