Operation Christmas Child landed at Pantego Bible Church a few weeks ago. Proudly, Jason, Molly, Bridget, Sydney and I, all participated. Yes, that’s right, one box per person. One child per person.

Bridget picked a 14yr old boy. Don’t ask me why. I gave her the choices and this three year old did not even hesitate. She wanted a “big” boy. And we shopped for “big” boy’s box. Tell me that’s not adorable.

Molly wanted a girl her age, so she could easily pick things that she would like. She got lots of wonderful little gifts for her five year old girl. Her box was the only one we couldn’t quite close the lid on. Heh!

Sydney picked a 10-14 year old girl. Her box had the most room it. Huh. Heeeeey, she forgot like underwear and stuff. Don’t worry I added to it.

Jason picked a 5-9 year old boy. Yes, he got to gift vicariously. The little trucks, coloring book, and even a baseball. He took such care to pack it all in. He definitely spent the most time finding exactly what he wanted for his little boy.

I picked a little girl 2-4 yrs old (of course). I think I packed the most expensive thing out of all the boxes. I wedged an electronic phone. It talks, it beeps, it rings. It even like says the alphabet backwards – okay forwards. What I’m trying to say is….It was a super cool toy.

Jason didn’t realize I had stuck that in there until he was checking the receipt (and why it was so expensive). Oops. In my defense, I offered to pay him back, and he declined.

Five boxes later, we had our Christmas Children shopped for. ALL of us were involved in the shopping, packing, and dropping at the Church. It was wonderful. The stage was overflowing with boxes. They let us know on collection Sunday, over 1,190 boxes were received. Wow! That is a lot of far away children having a very Merry Christmas. 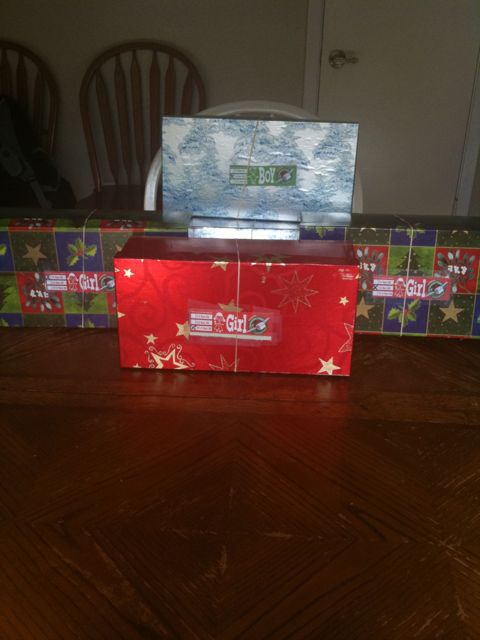 If you’ve ever attended Oakcrest, you understand. It’s not about organized religion. It’s about a place where they have nothing, absolutely nothing, and yet they still rejoice. Their hearts rejoice, and their spirits soar in hope. Pure, undiluted hope – or at least – the pursuit of it.

Oakcrest has a clothing shop, and a soup kitchen on Monday nights. On that night, a hot meal is served by volunteers, paid for by monetary donations from the Monday night Church service (the attendees being mostly these same people). After the service, a box of groceries is handed out to needy families for the week. So they can eat. Let that sink in for a moment. So they can eat.

I found my humble gratitude at Oakcrest. I saw what little they grasped in their hands, and how happy they were to have it. I saw their struggles, and pain in their faces, yet they still shined. I saw crumpled bills gently placed in the offering plate. I saw true life in those that desire just to be, in a better place, than where they were before.

The Oakcrest Angel tree represents these children. They are the recipients of the humble hearted who adopt them. Last year, I worked that tree – tirelessly. No one was adopting. The economy went to the dumps, and there wasn’t money to spend. So many were just trying to give to their own children. They could not even consider another child.

I could see these children in my mind’s eye. I knew them. I had read their applications. I knew the size of family they came from. If they had a Dad in prison, or not. I hurt for them, and by gosh, I wanted them to have a Christmas. They deserved something. Unashamedly, I became a salesman in my Church lobby. Yeah.

“See that one there, well HE has a brother. His tag is over here. Could you do both?”

“I personally know this kid, he is fourteen. He lives in a single parent home. He has it rough. He is great kid. Can’t you just take him? Just this one?”

“Look some of these kids have on their wish/toy list COAT. Can’t you just adopt them, so they can have a coat for Christmas?”

It was HARD. Every week went this way until the last Sunday. We had ten Angels left. I could have just sat on the floor and cried. Instead, I sent out A MILLION texts, begging. After my mad texting, three were left. I took one more (I already had three), the group leader took one, and Jason (via text) took the last little Angel. He had already taken one the week before. My last plea worked.

What a relief! ALL were adopted. ALL would have Christmas. ALL of them, for just one night, could forget their worries, and problems. For one night, they could be merry. They could be children.

One year later, the Oakcrest family tree has been up in the Church lobby for two weeks. One more Sunday of adoptions left (next Sunday), and there were 11 tags left on the tree at 12 noon this past Sunday. At 1215pm, after second service, I watched my Mom snatch the last Oakcrest Angel tag off the tree. Oh my heart. Instead of down to the wire, an ENTIRE Sunday remains with no Angels left. There were even people still walking up to the tree looking for a tag, to be told – they are all adopted. We have no more.

Heartfelt hugs, and cheers all around.

You see the Sunday before (the 1st Sunday of the lobby tree), I pulled twenty tags – YES TWENTY – to send to my sister in Houston. Last year, she heard me talk about these kids, and these families. She remembered how I begged, pleaded, shopped, bagged and delivered (all with a BROKEN right hand). She remembered, and she saved up $1,000.00 to give twenty of these kids a Christmas. 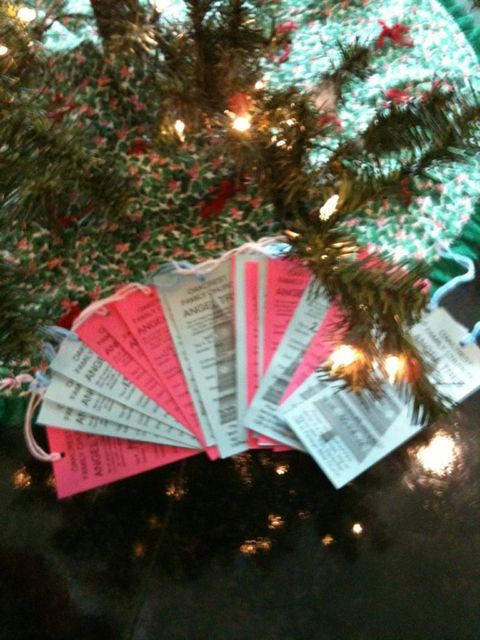 Angel tags from the Oakcrest Tree for my sister

When you figure out which ones are the Angels, the kids, or the ones adopting them, please let me know. Because I have no idea.