I’m really sad to be saying good-bye to 2009. It’s been a year of change, growth, challenge, and wonder. But I am also tilting my head up, stretching it towards 2010, because I know it will be a year – I will never forget.

Come with me as we highlight and reminisce.

January-Happy New Year! I spent New Year’s Eve at a Dallas Stars Hockey game with the love of my life. We cheered among a crowd of thousands at Victory Park in downtown.

Nothing better than his birthday and a New Year.

Feburary-My niece got married. This was Jason’s first big family function that wasn’t a funeral.

And we did a big Valentine’s Party with the girls.

March-This wasn’t too eventful. Sydney had spring break. My mom and Jason’s mom had birthdays. Twilight came out on DVD. I absolutely fell in love with Sushi.*this post is not from March but I had Sushi on my calendar and this is when we started going regular on Friday nights (I think) *

April-April made up for what March lacked. We took all the kids – and my ex-husband, his wife and little boy – to my Church’s big Easter egg hunt.

Jason’s oldest, Molly, turned five. It was the first birthday party with the girl’s mom for me. I had met her, but not spent time with her. I was really excited to get to know her. I thought we could have a friendship (like I do with my ex). I love those girls and she created them. Jason never said a bad word about her. She was as cute as I thought she’d be. Lastly, we witnessed the hardest thing I have ever been through.

Jason and I celebrated our one year anniversary of meeting. May 18.

A dozen red roses, a James Avery charm bracelet with a heart charm, and wonderful Ocean Trout Sushi. What a celebration. And my 20yr old niece and her boyfriend moved into my extra bedroom at the duplex.

My ex-husband, dad of my daughter, and my dear friend moved to Gulfport, Mississippi. Jason’s youngest, Bridget, turned three.

July-My one year anniversary with the girls. I met them on July fourth. We spent it with Jason’s family watching fireworks at Trinity Park in Fort Worth. Jason attended another family gathering of mine when my brother got married at his house. I cried at my brother’s wedding (oh gee). Worse than that, I’m in the background of all their vow pictures – crying.

August-My birthday month. I had my twenty year reunion. I got my first article about my step dad published. We took the little girls to their first major league baseball game.

.
I had the MOST amazing birthday ever. 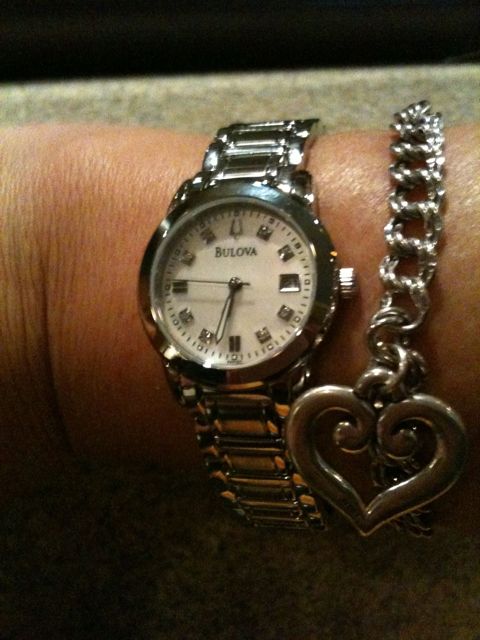 September-Threw together a last minute family barbeque. Saw P!NK in concert.My sister got engaged, but it rivaled seeing the Cowboys play their first Monday night game in the new stadium. Jason’s best friend got married. He was a handsome groomsman.

October-We walked for a cause because of someone we dearly love.

We raised $698.00. I also participated in another fundraiser BLOG 4 CAUSE E-Book. I was thrilled when my post Arrivederci, Italiano was featured on the wordpress home page for a day. I re-lived my paranormal experience at Halloween. At Hall’s Pumpkin farm, we got lost in a corn maze.

I shared my my love of gardening. Sydney and I laughed in our local mall and we got kicked out. I was published again for my homeless women story. There was lots of awesomeness.

December-My mom met the little girls.It was cool as ICE. My dad died.After a radioactive iodine test, I was diagnosed with a hyperthyroid called, Grave’s Disease. I got engaged. I wrote a poem to capture the magical thrill of my first white Christmas.

Wow! What a year I’ve had and it’s not over yet.

Tomorrow is my fiance’s birthday. I have a feeling it’s going to be one of his best. How do you top 31 days of gifts? Well, I have a great idea. I think he will be extremely surprised.

Thank you for reading and remembering with me. I wish you all well. I am thrilled by your comments, by your support, and your visits. I had NO idea what the blogging community was about. Being a part of it, is definitely the biggest highlight of my year.

Have a safe and Happy New Year. I hope it’s blessed beyond measure.