He lives in my head. He’s insane, scary, mutant, and ugly. He’s been living in my head the last week. Ahhhhh!!!!

Okay, it’s really a COLD in my head, but it was so much more fun to call it a clown. Don’t ya think?

IMM Clown arrived wearing his funny shoes. He had orange lapels, with a sequin black and white vest. What can I say? He has a passion for fashion. His first trick was a deep rumble in my chest. It was like a freight train was coming out of my throat. I tried to cough him out, but no luck.

Then my clown decided to turn on the funhouse faucets of my nose. Drip, drip, sniffle, snort. The SOUNDS he made. OMG! Most embarrassing of all was when I went to buy cold medicine at CVS. Laughingly he cranked the faucet as I was punching in my ATM code. No amount of sucking that sniff with all my might helped. I still dripped in front of the clerk. The horror!

That’s when I knew he was evil and that he had to go. I brought out the big boys. NyQuil and Mucinex to kick the stuffing out that clown. To show him who is boss. This wasn’t a three ring circus. Well that showed him alright.

Except…..we didn’t realize he was a MORPHING MUTANT. Yeah. He morphed to something like half his size. Climbed up into a sinus crevice behind my eye. Right next to my BRAIN (whimper). He proceeded to beat his drum, not the snare, but the big booming bass.

It vibrated through my noggin’ on the entire right side of my head. Dizzy, nauseous, and miserable. I had a feeling this clown was trying to bring me down. Break my spirit. Make me not happy. HA.

I showed him. Sydney, Jason, and I went to a movie. The Book of Eli. Good show. How do you like them apples clown?

Well, he doubled his efforts. Playing Rock Band like it was the end of the song and he was banging away for the bonus points. That was a mean trick. Then, he piled into his tiny clown car doing wheelies, and honking the horn over and over. Ahhh! That is likely to make a person beg for mercy and leave work early.

I went to the clown exorcist. He worked his mojo magic. Clown scrabbled. He morphed. He mutated and I think his head spun around three times. When the exorcist sent the steroid heads in. He knew he was doomed. Just look at em’. 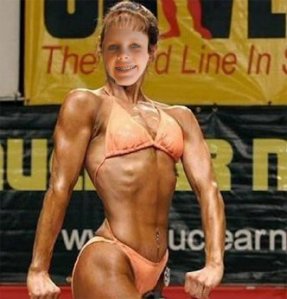 They are mighty. They mean business flexing their pecs and they are out to annihilate the clown man. Funny they look familiar?

ANYWAYS, they brought their arsenal.

Clowns HATE pink antibiotics missiles that run them down in their clown car. And they really, really don’t like nasal tear gas.

You are smoke buddy.

Say good-bye. No more insane morphing mutant clown in my head. I am finally horizontal and ready to face the world again. It was a doozy of a ride and not funny at all. Clowns stink.

On a personal note- The last few days, I have only read blog posts sporadically from my iPhone while I was waging war with the clown in vertical position. Now that I’m back in the land of the living – sane (ahem). I’ll be by soon. Can’t wait to see what’s been going on in your lives.

Oh and for those who missed it. Insane Morphing Mutant Clown = cold. Doc + medicine = Cold eradicator. Yay! And yes this is very silly, but I am SO HAPPY to be feeling better. 😀