Snippets of the past weekend ending with today.

Saturday night, Jason comes in from the back yard says,
“Hey, come look at this animal and tell me what it is.”

Yes, he is asking me – the animal expert – because I’m from Oklahoma? HA.
Of course, I knew what it was before I saw it. What other animal would be in the back yard in the city? Wait, don’t answer that, some things I don’t want to know. Well, let’s just say I’m not fond of rats. When I lived in Richardson we saw rats running along the electricity lines at the back of the back yard..eek! But I digress.

No this was a giant rat with a tail.

I was walking up to the tree stump to get a better look.
When Jason panics, “DON’T GET CLOSE! It might attack you.”
What? I respond, “Uh, no it won’t. It will play POSSUM. It’s a possum, get it?”
This whole thing cracked me up. He has never seen a possum? Really? That is so cute! Animals fascinate me. I thought it was cool Jason had a new pet. An outside one. Who lives on the stump and apparently plots attacks. This not a regular possum, oh no, this is a rebel! It won’t play dead. Rawr!

Molly lost another tooth! Her third!

She was so excited. Her other two bottom teeth are coming in pretty fast. We took her picture and she had to show THREE fingers for her three lost teeth.

Jason’s niece was baptized on Sunday. They live and go to Church only 30 minutes away, which enabled us to attend. She wasn’t like some of the other kids I have seen baptized. She really knew what she was doing and why. Her stance, testimony, and calm surrender was her statement. This young girl has a beautiful heart and soul. I felt very lucky to be part of her special day.

I only had to manage one child with Sydney. Easy right? With my future step daughters, I am having to learn what it’s like to juggle two. For example, this is what I discovered on Sunday afternoon.

If one is playing Wii boxing…..

She is scary good by the way.

and the other wants to watch Barney songs…

I can play it on my laptop. Phew! 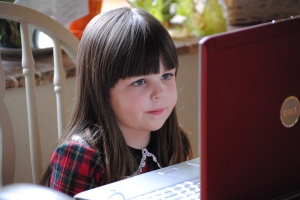 It really amazes me the technology that we have today. I know most people shy away from it with their kids, but I was raised by a Computer Scientist and Jason is one too. We love it.

See how that works.

In the backyard, I found out we are most definitely in a new season – SPRING.

The bees loved the pink blooms. They were flying all around landing on different buds. It was much harder to capture than I thought it would be. I guess I need more camera training. Either way, it was beautiful.

Saturday night was a night I will chalk up as one of my sickest times EVER. Right at 10pm, I was struck with stomach cramps so bad I could hardly move. Eventually I got to the bathroom and emptied the contents of my stomach and other insides, out of every opening crevice possible, off and on for about SIX hours. I was never so tired of a bathroom floor in my life.

Thankfully, I was fine the next morning. I have eaten since, just not a whole lot. It definitely made me lose my appetite. I was absolutely certain it was the shredded chicken on the nachos at Taco Cabana (food poisoning!) right up until, Sydney got the EXACT same thing, last night about 9pm. Hers has lasted about 17 hours (poor thing), but I think it’s on the way out. I have been giving her electrolytes and will try some soup next.

I find it odd the sight of my own kid puking doesn’t gross me out. I guess that goes to show how much we love them. She waited all night to puke in the kitchen sink next to where I was getting myself a cup of morning joe. Nice!

Get well Syd, get well. I sure hope that nasty stuff is done for!