I chose weekly writing prompt #1.
1.) If you could do it over again…
(Inspired by Barb from Half-Past Kissin’ Time)

Truth is, almost every time this question comes up, I answer it the same way. I wouldn’t change a thing about my life, or where I am today.

However, today I decided to answer this burning question with absolute honesty, and a little of the stuff dreams are made of.

I got a Nikon D3000 DSLR mid January this year. Since then I have had a burst of creativity. My mind has enlivened. The camera frees photographs, the photographs free words, the words tell a story. For me, it flows in a never-ending whirlpool of spectacular visions.

Recently, I decided to try portrait photography for the first time (with a non-family member). That post could be written using writing prompt three: 3.) Steppin outside the box (describe a time when you went way out of your comfort zone)
(inspired by Sherri from Matter Of Fact).
Believe me, this was the time. Yes, I had a big camera. No, I had zero bridal portrait experience and very little experience of non-family photos. I started out extremely nervous. What made it easier was – she really didn’t expect much. She knew I had a nice camera and liked to take photos. So, we did.

She had brought these army boots to take pictures in and an army helmet. Those and her bridal veil were very important to her. She wanted to make sure, I had some poses with them. I noticed the veil did not quite match the color of her dress, but never considered anything else, other than my eye was seeing it through the lens. The boots and helmet made me think a loved one was in the army. A dad? A brother? Come to find out (after the session), her fiance is in Iraq. The boots and helmet were his. Now when I see the pictures; the story unfolds. 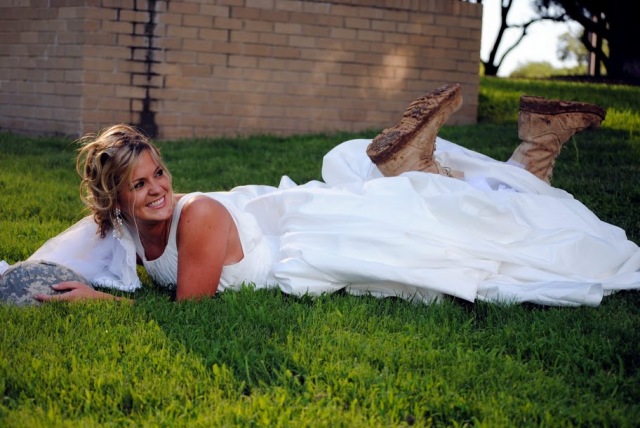 She is not just a beautiful bride-to-be. She is the ultimate bride awaiting the safe return of her groom. And the veil? Her mother’s. To me, it became a story of love, and family. Made more endearing by the photos taken.

She wants me to take photographs of them both when he returns home from Iraq. What an honor.

This is not the first time this has happened. On the drive back from Houston – which definitely qualifies for writing prompt four: 4.) A long drive…
(inspired by Lindy from Lindy And Ree). For me, Dallas to Houston is the worst drive. Ever. But I digress.

We stopped North of the Woodlands, at a little 7-11. There was a man seated in front of the store with a dark green duffel bag. I could tell he was homeless. He had on worn clothes. He didn’t smile, or frown. He just sat there; still and tall. Browned by the sun, his facial features resembled leather, as if they were chiseled on his face. I was surprised he didn’t have a cup, or a sign. But he had nothing- literally nothing. And he didn’t ask for anything more.

I gave him a few bucks upon leaving. He thanked me profusely and we blessed each other. I got in the car, but couldn’t help notice his features again, the bag next to him, and his story. What was it?

I wanted nothing more than to grab my camera, offer him twenty bucks to take his picture; ask his name and where he was from. Get his story. How he got there? What he did before? Was he a vet, a father, a brother? The opportunity passed. We drove away. But I never forgot that burning desire to know and to capture.

Maybe, I should have been a photo journalist. Maybe, I still could be. If I could, would I? Would I choose to discover this desire earlier in my years and turn my life in that direction? Maybe.

I find it all very fascinating and interesting. I have my camera ready…..what’s your story?

42 thoughts on “My Life Edited”