I just had to share some cuteness from the holiday. Technically pre-holiday since some I took on Averey’s two month photo shoot.

Halloween night Jason went trick or treating with the girls (and Fred the Cat) while I worked til dark. And after work, I tackled some photo edits. The all-women’s photography group I started with five other women over a year ago called, Chics Who Click, sponsored the photography for The North Texas Buddy Walk. I got back into town on a Friday night from Milwaukee and shot the event the next morning. *That* is a whole ‘nother blog post, but one of the reasons I was on the computer and not handing out candy (a very good reason!).

Finally, I get to sit in the living room for the first time about 8pm. I flipped on the TV for some non-thinking time and somehow get sucked in to watching Mama – in the dark – all by myself. My daughter so kindly texted me her advice to NOT watch it alone. *cry!*

So now, I get to sleep with the flashlight next to my bed. Thanks Mama!

And now for that cuteness I promised you…. 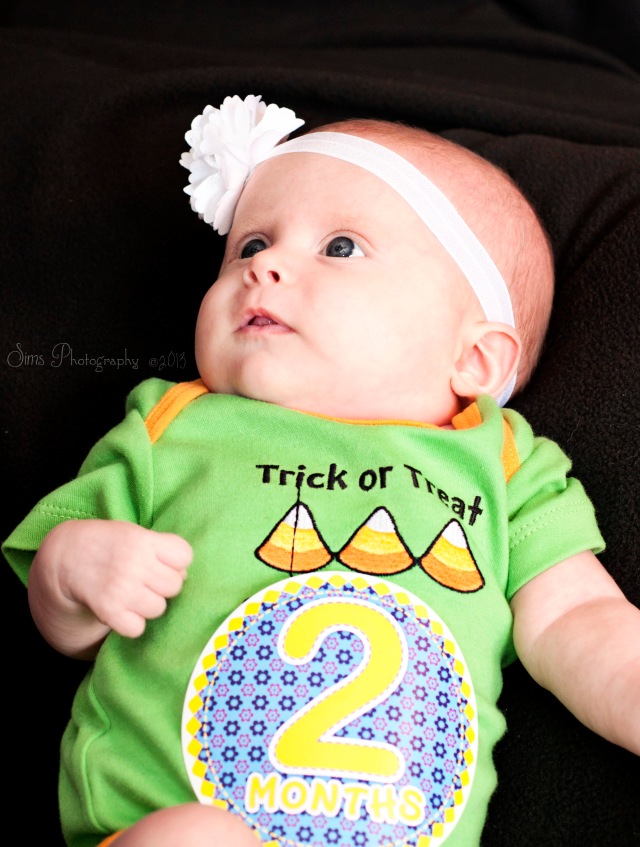 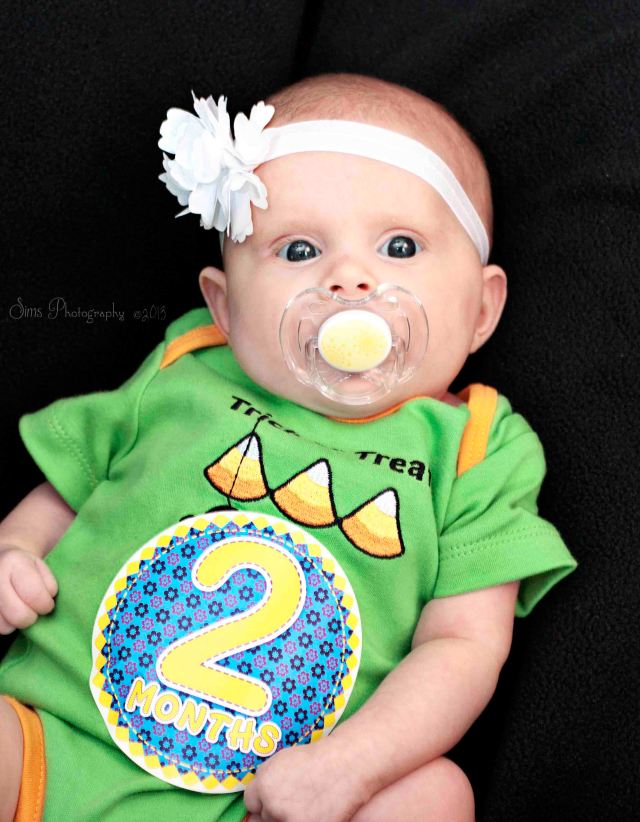 I warned you about her cuteness. I could barely stand to put her down to take her photos. I’d rather hold her and talk to her, but someone has to photograph this baby. Might as well be Grammy.

On the same day as her two-month old photo shoot, we stopped at a little pumpkin patch off the side of the road. I thought…wouldn’t it be cute to get her photo with lots of pumpkins?

It is absolutely darling and Bridget is such a good little Auntie and holds her just perfectly.

After a few clicks, the show was over and baby wanted nothing to do with any pumpkins. Or Halloween. Or Pirate ladies that worked there wanting some baby snuggles. Or buying pumpkins. Or being held over a pumpkin. Or letting both Aunties hold her while I got a picture in the pumpkins of all of them. Nope none of that.

And when the talent is not happy, ain’t nobody happy.

Not to worry. I picked her right up and held her close. A little rock and little sway and this grand girl was just fine.

And no more pumpkin patches…..for a year anyway.

Hope you all had a wonderful Halloween. We are heading to Oklahoma tomorrow to see my Mom and take a four generational photo. Any guesses on who will be the star of the shoot?

All I can say is…… more baby time for Grammy!

18 thoughts on “Oh, Halloween with Your Scary Movies and Pesky Treaters”