The sun comes out to brighten our days.  But the snow, and ice (which is still snow to Texans) was a fun and dramatic change from our sunny 60’s (sometimes 80’s!) winter.

The Dallas metroplex is one of those areas when the weatherman says, “Snow.”

And when he still says, “SNOW!”

Well, we believed! We believed last week and we believed this week. The magical ice and snow and allllll the blustery cold things happened. We broke out the gloves and scarves. We made chili (well, my sweet hubby made super, yummy, delicious chili). And most of the household had many wonderful snow days away from the office and school.

Except for me…because…I work for a travel agency. Even better, I supervise the EMERGENCY SERVICE Department of said travel agency. And what do you know? Snow storms and flight cancellations seem to top the #1 EMERGENCY of travelers. Huh.

But you know, with the skidding and sliding of planes off runways and such. Yeah, that. It’s kind of important that they CANCEL these precarious flights, lest you end up crashing into a ditch, screaming as you plunge down a blow-up slide while highly flammable jet fuel LEAKS nearby. So not the winter vacation you were hoping for. This is why I am happy to work snow days and keep you extra safe. You’re welcome.

But fingers crossed, someone has snuffed out that darn ground-hog and it WILL FORtheloveofGODplease be Spring real, real soon.

In the meantime, enjoy my lovely (and rare) SNOW photos. It happened. It really did. 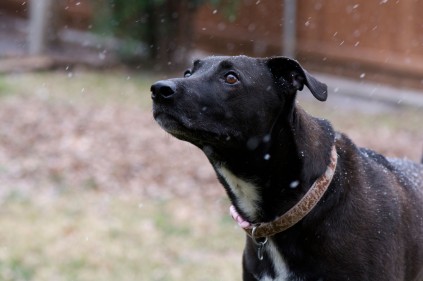 This. This thing called snow.It is magical. I bet I’ll be eating snow balls later.

Maya kitty sees her first snow. She batted at the window like. WHAT? What is that??

I don’t understand this thing called snow. I need a nap.

It’s snow Maya. I tried to take her out to see it in person, but she FREAKED and clawed my shoulder. I think that meant – HELL NO into the snow I won’t GO!

My Anna dog runs through the snow/ice.

Anna dog and my old gal Salem have a snack of crunchy, tasty snow. 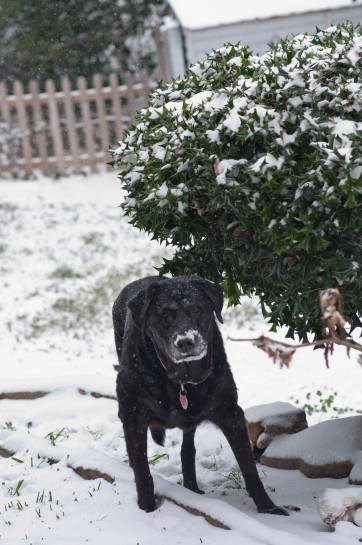 My Black Lab Salem. She is 12yrs old going on 13 this year. And she *still* loves the snow. Sweet girl.

This was the first wimpy snow. I didn’t get a pic of the bigger snow on my car.

The girls play on the trampoline. Snowballs and jumping – what could be better? 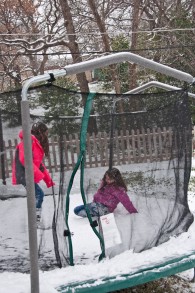 The girls chunked ice/snow balls at Anna. I am really surprised it didn’t knock her out. She loves catching snowballs more than anything.

Anna the Snow ball catcher. Who needs a Frisbee?

This snow is swinging. Heh.

Hello Kitty in the snow. 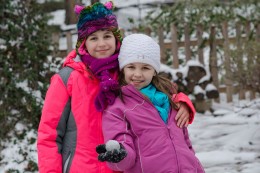 The girls and the snow (ice).

Bridget in the snow. 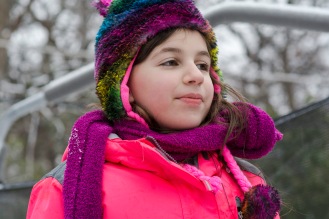 Molly in the snow.

The snow melted. Some ice was left. The girls wished for more snow (they got it a week later). 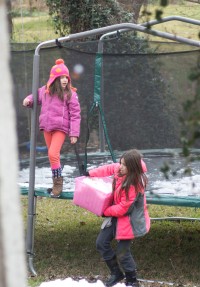 But that didn’t stop them from trying to use the leftover ice/snow from the trampoline to build a ICE SLIDE.

This is what I call glorious busy work. LOVE.

Our gorgeous trees in the back.

Our nearby park as the snow was melting.

The ducks at the park. They don’t seem to mind the snow.

All the ducks in the pond took off flying as if their life depended on it. We looked up and saw this scene. Apparently, the ducks spotted this guy and knew it was feeding time. It was too funny!

Clover covered in snow. I call it my lucky heart clover.

28 thoughts on “After a Dark and Snowy Week…”