Oh, how I love to reminisce!

About travel, about birthdays, and most especially, about my MOST favorite place – California.

A year ago, I celebrated turning forty on a mountain above Palm Springs. What a spectacular day. I couldn’t get enough of the forest, the cliff hangs, and the beautiful desert and city views.

These are nice memories to have (and photos too!).

This year, I celebrate year forty-one by working. Meh.

But hey, it’s not so bad. My husband was out-of-town for a week, and made it back justintime. I have never been happier to see someone in my life. I consider myself pretty tough and independent. And really? It was fine. I wasn’t some kind of weeping, lonely mess. But man was it empty – inside and out. Believe me, being on a mountain is great, but having the best man in the world by your side? That is fantastic.

This is not the best photo, but it’s the only one I have of the sign.

I must say, I LOVE the ocean. LOVE IT. My second love? The MOUNTAINS. Any mountain. My grandma was from Pueblo, Colorado. We visited the mountains every Thanksgiving. This is what I love MOST about California. You have the beautiful beaches. AND (like the Coke Zero commercials) You have the gorgeous mountains too. Just a hop, skip, and highway drive away.

I believe this flower is called Yarrow. It peppers the mountain side and really gives it that pop of color that is so breathtaking among the boulders.

I saw lots of wildlife – lizards, squirrels, chipmunks, and birds. 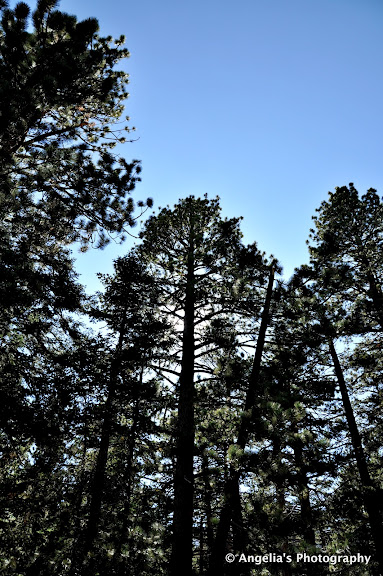 The enormously towering trees were also amazing. I live in the city and we just don’t have this view outside of our door. 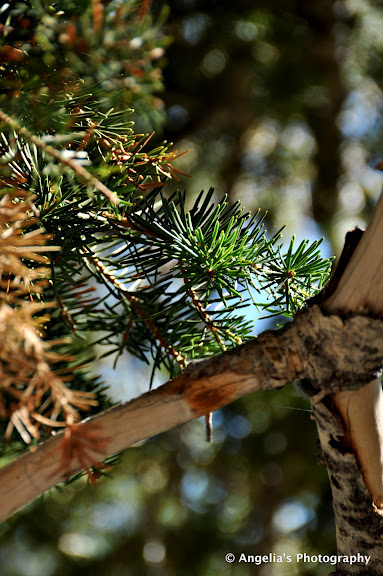 And the fresh pine scent? Heaven.

I don’t know what is not to love about a mountain.

I climbed a rock for this view. It was a little scary as I have zero balance and/or climbing skills.

My husband climbed a rock too. 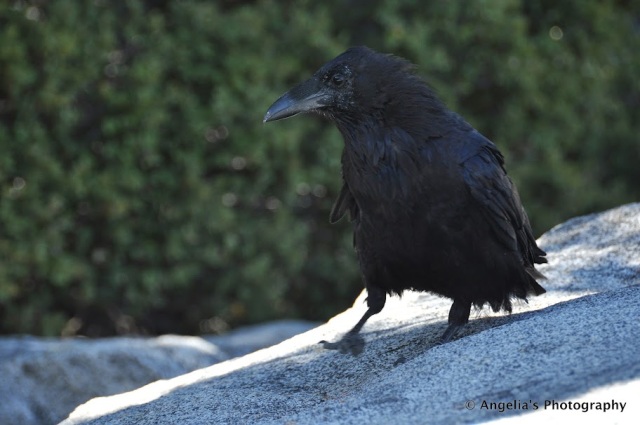 While my king was gone, I was visited by a random black bird.

He decided to land on the very rock I was perched on (out of alllll the rocks on the mountain). It was a bit unsettling in my zen state. Wings are VERY loud on a quiet mountain side. And he just kinda marched around flapping and looking at me very curiously. I got quite a few photos of my bird visitor. 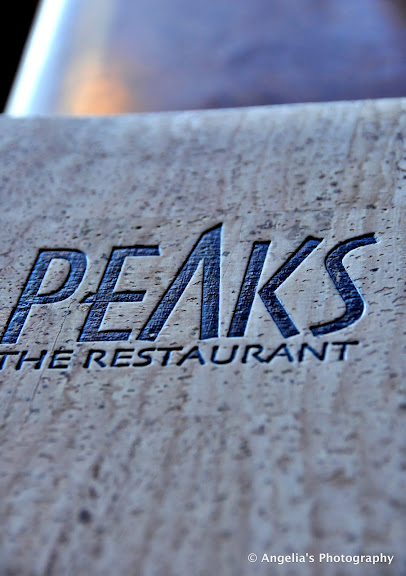 Then my husband surprised me with restaurant reservations at this fancy place.

I had a delicious piece of salmon, but mostly I enjoyed the fabulous views.

My view from our dining table.

Sunset view from the balcony of the restaurant.

And this? I can’t even describe. As the sun set and the contrast changed, I couldn’t take my eyes off the captivating landscape of the desert.

Truly, my year forty is one to remember – from the start to the finish.

Now? I am ready for the next. Come on forty-one show me what you got. I know it’s going to be good.

Have you ever been faced with difficulty in your life? You wonder…..why can’t this be easier? Why can’t I make the right decisions? What am I learning here?

It’s like you have your own personal mountain to climb.

And there are ROADS to led you there. 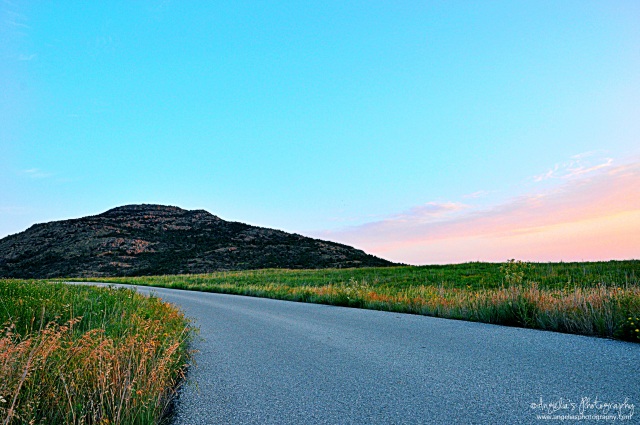 And there are beautiful sights along the way. 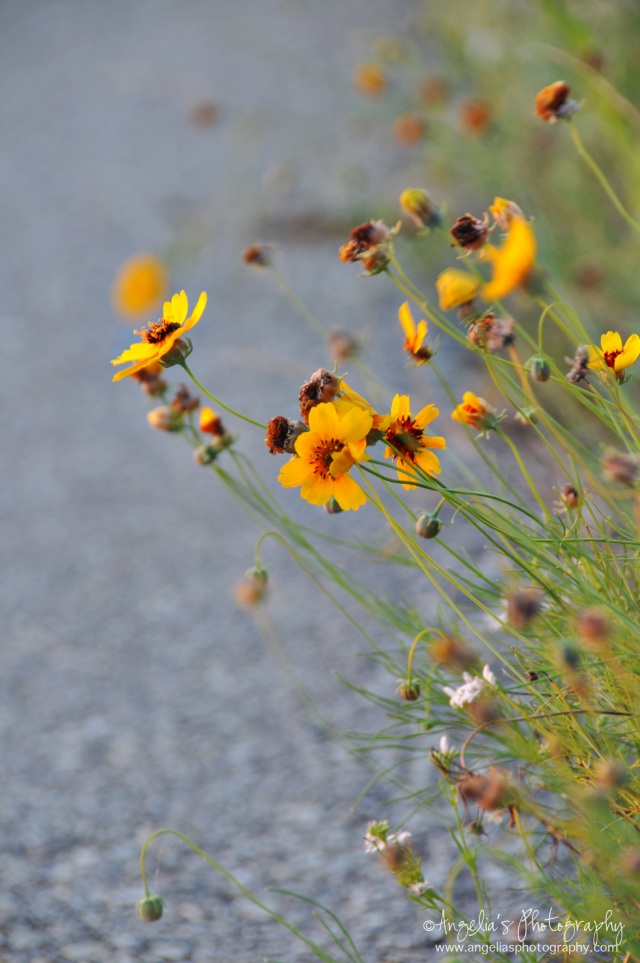 Dainty blossoms that call for you attention.

Prairie buds that peak your interest, and make you wonder about the beginning, and the end.

Anything to take your mind off CLIMBING a mountain – even if it is your mountain.

It stands before you. Waiting for your journey to begin. Waiting to show you why it is hard to reach the top.

But all the while……

Your strength is weak, and rather than fail, you admire the road to the top and continue to skirt AROUND your mountain.

Basking in the beauty of the land. 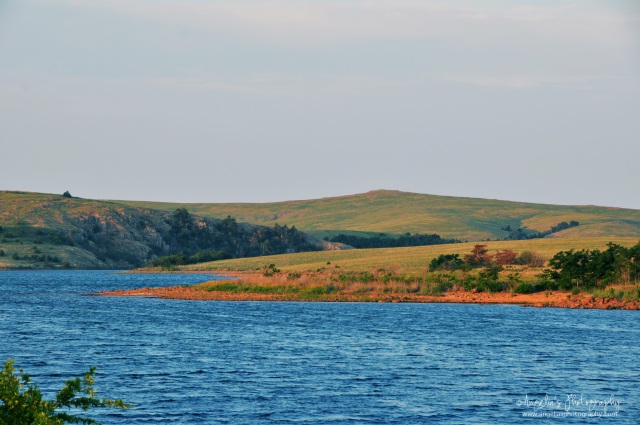 Enthralled over the creatures that live here. 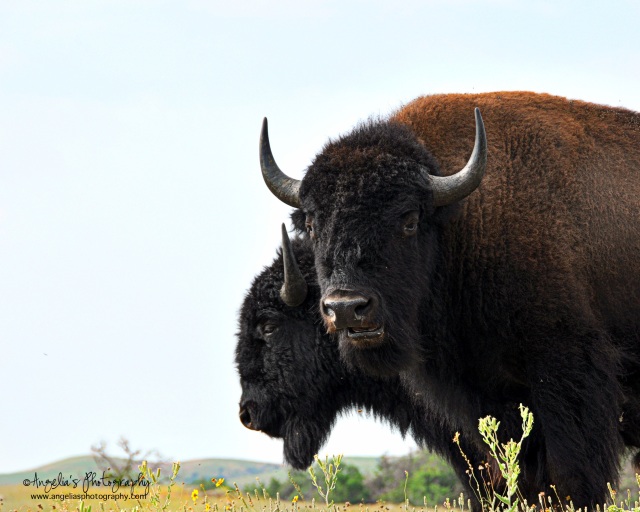 And you want to live here too. Safe and secure in your gorgeous surroundings. Feet on solid ground. Refreshed and holding on to ALL your energy. 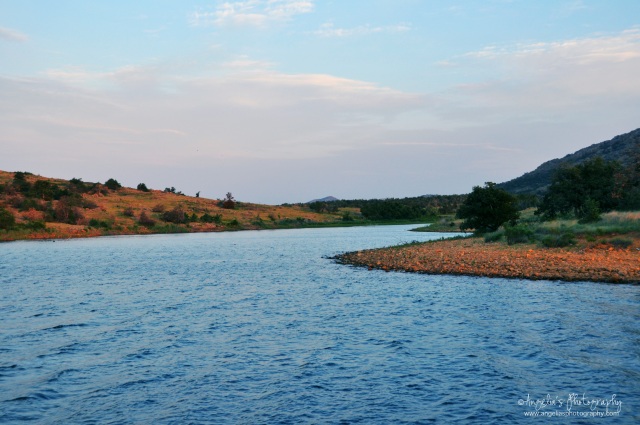 But your mountain is calling you. 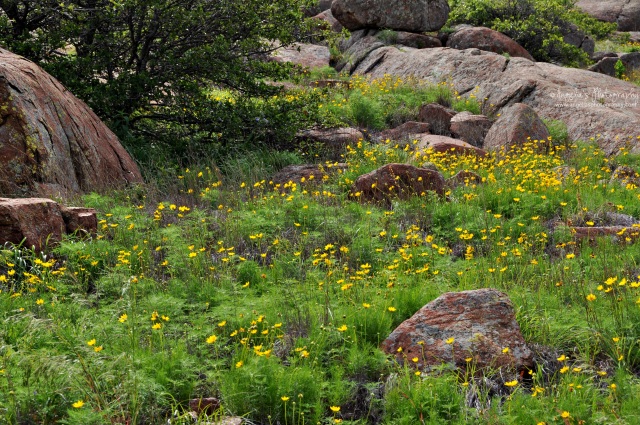 And the only way to enjoy ALL that you have around you…..is to make your way up. No matter how you have to go…..the easy way, or scaling the side.

Every fiber of your being goes into this task. This task YOU must conquer, and conquer alone.

You make the climb to the top.

James 1:2-4 Count it all joy, my brothers, when you meet trials of various kinds, for you know that the testing of your faith produces steadfastness. And let steadfastness have its full effect, that you may be perfect and complete, lacking in nothing.

Only then, can you see a vastly different landscape than your view from the ground. You can see the expanse of your dreams to the horizon and beyond.

Your laboring breath, and fatigued body is nothing short of miraculous. And, oh how proud your are, of the joys your journey has brought you to and through.

It’s all beneath you now. And can be appreciated in all its glory.

Yes, the sights below are astounding, but it is nothing like the vista from the peak.

“It is not the mountain we conquer but ourselves.” – Edmund Hillary

**This story won 2nd in humorous travel stories at my work. The prize? An iTunes gift card. Woo!**

Summer of 2009, my boyfriend (now husband), and I, decided to take a weekend trip to Utah. We wanted to get away from the Texas heat and enjoy a little “winter” weather. What did we know about Utah? Well, not only are the temps a lot cooler, but it has mountains and the largest salt lake in the western hemisphere. The largest! I was pretty sure I read somewhere about all the healing wonders of salt in said ginormous lake. I couldn’t wait to go float on my back gaining holistic healing superpowers. Ahhh!

I had magic dreams of the Great Salt Lake. Watching the sunset on the beach, absorbing the magical minerals into my pores, and breathing in the pure mountain air with my honey by my side. We would enjoy all the gorgeousness of nature together. I just knew, knew, I would be the earthiest gal around. Restored, renewed and ready for the orange ozone alerts upon return Texas.

Flying over the Great Salt Lake to land in Salt Lake City, I could see the lake from the sky. It lit up with the setting sun and it was spectacular; blue and pristine. I about jumped out of my seat in glee. There it is! The Great Salt Lake! Right there! Awesome! We planned to trek the next day to Antelope Island – home of the Utah buffalo – and apparently, antelope too (heh). They all live happily ever after on the Great Salt Lake. What fun!

At the rental car counter, Hertz offered my boyfriend an upgrade to a Jeep Wrangler, top removable, it was a sweet deal. Oh yeeaah! He really wanted a Jeep Wrangler, plus I could see us on the road to the beach, wind whipping our hair, shades on as we cruised the lake front – ultra cool. Yes! We took the upgrade. 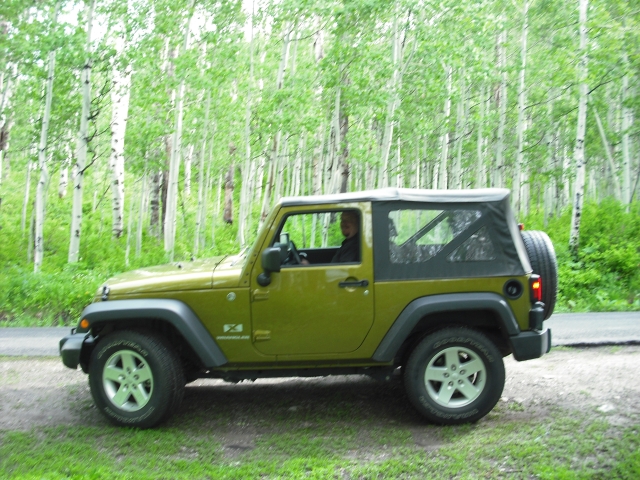 The next day, we make a stop at Wal-Mart for beach gear. We pick out straw towel sets with matching pails and buckets. We take the top off the Jeep. The sunshine is beautiful and bright through the roof. Perfectly clear blue skies for a perfect drive to the lake. We head off to an island in the middle of the Great Salt Lake – Antelope Island. Weee!!

My first clue that I should have done a tad bit more research than Wikipedia was when the SMELL hit us like a ton of bricks. Not only was it the worst thing I have ever smelled (and I grew up with LOTS of dogs – HOUND dogs), but it went on for MILES. The entire area around the lake was marsh. The marsh was full of BIRDS. The birds – well, they were full of unspeakable evil – let’s just say, they had serious intestinal issues. Must have been something they ate. Since the top was off, there was no closing the windows. We held our breath, which? Turned out to be a very good thing.

Enduring and labor breathing along the road to the Great Salt Lake, we finally catch a sheer glimmer of beauty through the icky marsh. About that time was when a firestorm of BUGS enveloped the Jeep. Not just the Jeep, but the windshield, the side mirrors, our clothes, our hair, ears……… everywhere. This was no ordinary swarm of bugs, this was a massive attack of gnats pumped up on minerals. It should have been our second warning to stay away from the Great Salt Lake. But nooooo. We kept going. Eyes squinted. Mouths closed.

We started noticing these swarms more and more, not just on the road but everywhere else. In bushes, and roaming the countryside in clusters of intimidating wing spans. I started feeling uncomfortable the closer we got. Not to mention, still picking off the kamikaze gnats tattooed to our clothes and foreheads.

Arriving next to the Lake, I couldn’t help wonder if another bug bombing was on the way. Outside the Jeep, we had zero protection. Not even the windshield. I get out ready to duck for cover. Every step tentative. The air at the lake felt odd. It’s flat, no sound, no echo. More bugs here and there, but no roving gangs in sight, just loners. Then there were the birds. Loud birds. An island off the island of birds. Yes, more birds! Then the lake itself up close and personal just looked stank. I didn’t even want to put my TOE in it. To get close enough to do that, I had to step over algae and foam, and guess what? Yeah, more bugs. Bugs covered the top of the sand on the beach and bugs of a different kind roamed in the lake. They were like mini seahorses, but deformed and atomic looking. Scary.

It was a ghost town on the beach. No one. In the middle of summer. Now, I knew why. Regardless, I was determined to stand in the Great Salt Lake, no matter what guts it took. I marched my way over by way of the least contaminated path through the foam, the mud, and more waves of flying bugs from my disturbing footsteps. Swallowing hard, I removed my shoes and socks, then stepped my bare feet into the Lake. Next to Jason, I stood there. Trying to feel peace. Trying not to be creeped out. Trying to take in the wonder of the Great Lake. It lasted for about ten seconds. Then we hit the road faster than the bugs could follow us (I hope).

Come to find out, the Great Salt Lake is also known as “America’s Dead Sea”, and home to three things; birds, brine shrimp, and algae. The only creatures that can live in a lake with that much salt concentration. It is as gross as it sounds. I didn’t get much minerology therapy, but I will say the mountains are very nice. Park City! 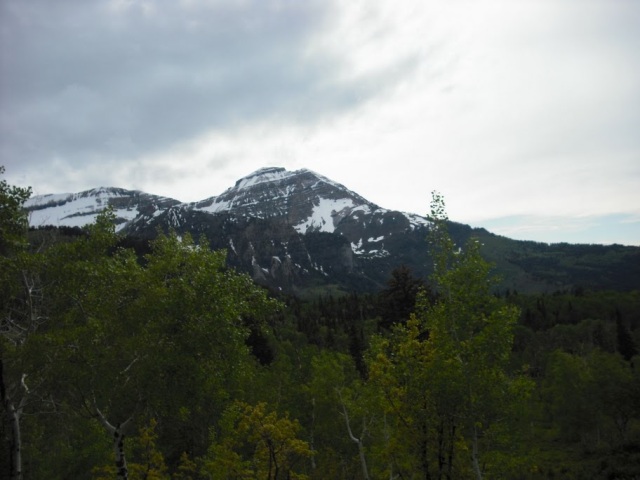 Our great escape ended on the summit – bug free.

*I feel the need to add an edit to this post. Salt Lake City is amazing. Wonderful, kind people. Beautiful Mormon temple with an incredible history. The mountains are breathtaking and there is SO much to do there. A weekend is not long enough. Just scratch the Great Salt Lake off your to do/to see list.