Last Christmas, I was not glowing from head to toe from radioactive iodine thyroid testing nor from the sheer glee of getting engaged. In fact, I wasn’t glowing at all….well yet.

See, the sales representative for the travel company I work for decided to take me on a road trip to Austin. We were to meet a new client I would be assigned to. This was great. A whole day off work. A ride three hours to Austin and three hours back. Lots of time to talk and catch up. I have worked with Debbie over 17 years. We have been through a lot together. Grown a lot together. It’s not just a friendship. It is a history.

I soon discovered road tripping with Debbie was not all it was cracked up to be. She liked to stop – a LOT. I am a get there kinda gal (similar to a guy but not quite). So we stop. And we stop. And we stop again. I went inside the store and got a Coke to drink. I figured why not. I need a good caffeine sugar rush. I leave the store right behind Debbie. She goes to the driver side to get in. I am walking towards the passenger side.

I am looking at the ground. I remember thinking to myself the parking lot was flat. There wasn’t a step. Just as I thought that, I felt my foot hit not pavement but air. Unfortunately foot number two was already following close behind. Instantly, I had no footing and down I went. One hand held a Coke so it splayed outward, the other hand – my right – caught the concrete. HARD.

It was not pretty or graceful. It was SPLAT. I fell forward landing on knees and one arm. I ripped a hole in my pants on the right knee. My Coke was broken and spewing. I was really bummed about that. I was pretty stinkin’ poor and didn’t want to dish out another buck for a Coke. I stood right up and shook myself off. Debbie was shocked. The truck passenger next to us, also shocked. But I was okay. I WAS. I was embarrassed to no end, but just fine thankyouverymuch.

The nice lady in the store gives me a free Coke (bless you). Onward we go to Austin, and my wrist begins to swell nice and round. Then it hurts. Debbie stops so I can get ice. Debbie stops to get cookies from a bakery for the client. I can no longer open the car door with my right hand. We stop again at the clients place. I can no longer open car doors, office doors, and now shaking hands is a real booger. Nice to meet you. OUCH.

We head back. Debbie is extremely worried. I am still very much embarrassed. I feel like a dufus. I FELL OFF A CURB. I assure her. At the most it is sprained, please don’t worry. I wasn’t going to. And I didn’t. Back in Dallas, the swelling has not gone down. Now I am bruising down the inside of my arm. A friend comes by and sees it. He thinks I should have it checked out. Debbie is texting me, begging me to get it checked out.

Finally, I decide to go to the doctor just to make sure. I head to the CareNow clinic by Jason’s house. This is when I saw him again after a two month break, what a great excuse to see him. How could he resist? I was maimed. The doctor x-rays my hand after a quick diagnosis of movements. I could not lift my hand up, flexing from the wrist. (FYI-I was still able to text). She comes back into the room with the results of the x-ray.

“Do you think your injury is severe?”

I put down my phone with my right hand, stopping a text to give her full attention. I shrugged, “I think it’s sprained. I fell down. It’s really embarrassing.”

“Ms. Sims, your hand is fractured not just in one place but TWO.”

Oh yikes, suddenly my texting ability is gone (I switch to my left hand). My hand feels funny now. Not a good funny. “Are you serious????”

“Yes, I am. This is a very dangerous break. You have broken a carpel bone that has blood flow in it. If not properly casted in seven days the bone could die. You also have a buckle fracture to your radius bone in your forearm.”

WHAT? She slips a splint on. “You can take this off but don’t use the hand. It’s very important you see an Orthopedic doctor within seven days.”

Holy Moly. This is serious. I friggin’ BROKE my arm. My RIGHT arm. OMG!

Life as I knew it changed dramatically. I will ask you to try (just once) brushing your teeth with your left hand. Opening doors with your left hand. Pulling up, and buttoning pants ONE handed. And I won’t even ask you to try writing because..well, that’s just mean. I went from completely independent and freakishly strong to – a weakling. Not only a weakling, but a weakling incapable of the smallest tasks, a weakling incapable of the smallest tasks AT CHRISTMAS. Ahhhhhh!

And I am not going to kid you. It HURT like nobodys business. It hurt worse than anything should hurt. Not just pain, but an ache, a constant ache that no medicine could cure. I won’t go into the drama of getting it casted but let’s just say, two doctors, and a dozen frantic calls later. I get a cast. A cast that feels like it weighs FIVE pounds. A cast that I did NOT get to pick the color. It was yellow. Not just any yellow but like a highlight marker yellow. This picture does not do it justice. 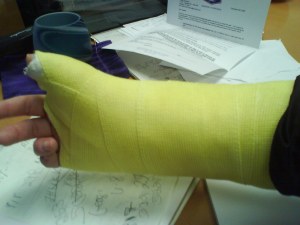 I mean why not tape a caution sign to my back too. Let’s just announce what a hazard I am. Beep. Beep. Beep. Big yellow bus coming through. I always thought having a cast would be cool. NOT.

Well, I have to give myself credit. I can be pretty ingenious when I want to be. When I am faced wearing a bright yellow cast, I get ingenious. So, I decided to buy some fabric marker pens from Michaels and paint that sucker!

Here is the result.

Beautiful ain’t she? You could hardly see the yellow. I was pretty proud of myself. If I was going to get noticed for a cast, let it be for a purple one. Not a dang yellow banana!

I somehow learned to type (because my job depended it on it) with a casted right arm. I typed FAST. It was pretty incredible. It HURT horribly. My shoulders ached from the offset of the cast, then from having to hoist my arm up all day to type with the four fingers sticking out. At night was the only time I took a pain pill. I had to take baths. It’s really hard to scrub with just one hand. Go ahead, try squeezing soap, with one hand, on a buff or a washcloth. Nope, don’t cheat. ONE HAND. The other is in a cast wrapped in five plastic bags, you don’t even have fingers to use.

The simplest things were a challenge. Like washing my hair one handed. At first, I tried a friend washing my hair in the sink for me, but that did not work at all. Then, I figured out a system, in the kitchen sink, with small dixie cups filled with shampoo and conditioner. It worked quite well I thought.

Eventually, I got bored with purple. I thought..black would be better. Black goes with anything. Another portrait on my arm.

Yeah, uhh, black over purple over yellow. Eh. Not so good. You know what? Nothing I could do about it. I made it another week and colored it again. (well, first we tried to SAND the black off, then color it). I think my cast dang near FELL off from abuse. It didn’t. It ended up green. (yes I know I should have left it purple) In my defense, I was in a cast for SEVEN weeks. SEVEN.

My daughter and her boyfriend, so kindly, put up the Christmas tree. They hung every ornament. Every wreath. Every candy cane. They cleaned every week for me. They carried in groceries. Anything they could do to help me, they did. I can not even tell you what a blessing that was. There is not much worse than a broken arm, and the brokenness you feel as a person. To have two teenagers step up in compassion and care was truly amazing.

Last Christmas was NOT easy, but I will never forget the Timeless Deeds those kids performed.

Merry Christmas, may it be as bright and cheery as my yellow cast.

And just in case you wondered if a cast stopped me from trying anything fun……….I’ll let the pictures speak for themselves.

Courage, sacrifice, determination, commitment, toughness,heart, talent, guts. That’s what little girls are made of; the heck with sugar and spice.